Why Chinas influence in BIMSTEC is growing

- Why Chinas influence in BIMSTEC is growing 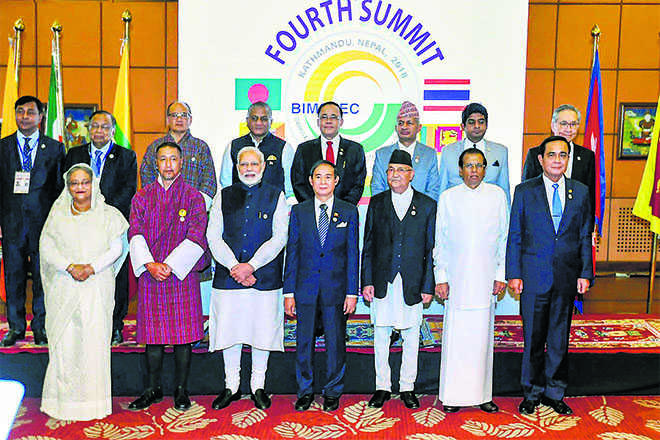 Why China’s influence in BIMSTEC is growing

India, with its soft power, can win over the regional grouping, but the main reason for China to be so important is its money power. However, with China’s economy slowing down and its ongoing trade disputes with the US, it may step back a little. It is now that the Modi government should try to capitalise on important links with the sub-region.

How is it that China's influence in BIMSTEC (Bay of Bengal Initiative for Scientific, Technical and Economic Cooperation) member countries is increasing so rapidly? Even though Prime Minister Modi has tried to woo and win over the members — Nepal, Bhutan, Bangladesh, Sri Lanka, Myanmar and Thailand — they are veering towards China. Of course, India cannot match China in terms of aid given for infrastructure building or offering technical help. Naturally, Nepal a land-locked country, is tempted to facilitate the movement of goods through a port in China with proper infrastructure in place.

Nepal: India is a big trade partner of Nepal as well as the biggest investor. But the trade and transit blockade of the Indo-Nepal border from September 2015 to February 2016 created much bad blood in Nepal and left the people disgruntled and turn anti-Indian. Modi has gone out of his way to woo Nepal, harping on the common culture. He visited Pashupati Nath temple during the fourth BIMSTEC summit recently and donated funds to build places for pilgrims to stay. But hardcore Nepali nationalists see much opportunity in becoming closer to China because it will help them become geopolitically important and strategic.

Nepal has signed an agreement with China to use four of its ports — Tianjin, Shenzhen, Zhanjang and Lianyungang. The Chinese government has also agreed for Nepal to use three dry ports in China at Lhasa, Lanzhou and Xigatse. China-Nepal trade has increased manifold over the years and there is only one border crossing. But distance is a problem because the Chinese ports that Nepal is going to use are 3,000 km away whereas Kolkata is 742 km away. Increased connectivity with China is aimed at reducing dependence on India. A new railway line covering harsh mountainous terrain has been proposed between Nepal and China, for which it is offering soft loans, but Nepal is wary about a debt trap. The China-Quinghal-Tibet railway is operational, carrying hordes of Chinese tourists to Nepal.

Bangladesh: Surprising is the case of Bangladesh. Being a close ally of India, the government is now heavily into infrastructure-building with the help of China. India recently made a big gesture in offering a soft line of credit of $4.5 billion with 1 per cent interest rate to be spent on infrastructure and social sector. But China has deeper pockets and can dish out billions of dollars to increase its influence in the region.

Beijing has provided more than $3 billion for constructing a 6-km bridge over the Padma river that will link north and south Bangladesh by road and rail. It is a challenging engineering project slated to open this year. On the whole, China has committed to $31 billion worth in projects in Bangladesh, including roads, railways, coal power plants and water treatment facilities. On the other hand, Bangladesh is sensitive to India's worries about Chinese presence in the sub-region. In 2016, Bangladesh cancelled a plan for China to build and operate a deep sea port at Sonadia after pressure from Delhi. Bangladesh, it seems, is happy to accept Chinese money, but does not want China to interfere in anything that India sees as a threat to its security.

Sri Lanka is beholden to Chinese companies because they have taken control of the pHambantota port for 99 years. This is because Sri Lanka was unable to repay the money borrowed from them. China is to develop an EPZ covering 15,000 acres. With Rajapaksa back in power, closer ties can be expected.

Myanmar: In the case of Myanmar, China was already in collaboration with the military junta. It is into various investments in Myanmar which will improve its infrastructure, like the proposed Myanmar-China economic corridor which will connect China's Yunnan province with three economic centres in Myanmar -- Mandalay, Yangon New and the Kyaukphyu Special Economic Zone.

For Myanmar, China is the only country that is both willing and able to provide economic assistance and political support it currently needs. Its increased dependence on China is partly due to lack of support from other sources of assistance, like the US and EU. Indeed, Myanmar is concerned about its growing dependence on China, but believes it has few other options. As Vice-President of the Union of Myanmar Federation of Chambers of Commerce and Industry said, "Myanmar can't sidestep the Belt and Road Initiative even though we have many views regarding debt threat."

Thailand: Thailand, being part of ASEAN, has close dealings with China. It also has an open border with China. The reasons why the BIMSTEC FTA is stuck include a spat about duty reduction by Thailand as also because India is more afraid of a huge influx of Chinese goods flowing in through Thailand. The China-Thailand FTA was signed in 2003 and Thailand is supposed to be a pivot for the support of BRI. China is building a multi-billion dollar railway in Thailand, but there are problems as it will be passing through farmland, which Thailand does not want.

Bhutan: Only Bhutan, being embedded in Indian geography, has been a close ally. Yet, it has failed to sign the BBIN Motor Vehicle Agreement because of its fear of having more pollution through the passing of trucks in its fragile ecosystem. It is holding its cards close to its chest regarding talks about Doklam with China.

Thus, with India having regional supremacy for so long, China is itching in to take over that mantle. Even though no member has actually asked for China's membership in BIMSTEC, its presence in the sub-region is palpably visible.

India, with its soft power, can win over the regional grouping, but why China is so important is its money power, even though it is under a mountain of debt. With its economy slowing down and having problems in the ongoing trade disputes with the US, China may step back a little. It is now that the Modi government should try to capitalise on important links with the sub-region.