Why A Pan-India NRC Is The Need Of The Hour

- Why A Pan-India NRC Is The Need Of The Hour 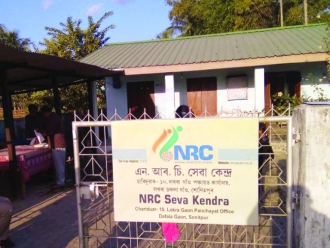 Reactions to the procedure of National Register of Citizens of India of (NRC) to identify illegal migrant population in Assam, as per the provisions of the Assam Accord of 1985, is the latest example of the manner in which matters of national security have been vitiated for political exigencies. The Accord, signed between the people of Assam and the Central Government, mandated detection, deletion and expulsion of foreign entities entering Assam on or after March 25, 1971. It expressed the will of the people ie, the hallmark of the Indian democracy.

The geographical congruency of Assam with Bangladesh made the State more vulnerable to illegal migration from across the border. It was further amplified by some political forces active in the region that saw the migrant population as an easy vote-bank, carefully built and nurtured to be used at the whims and fancies of its political masters. In 2005, it was Trinamool Congress chief Mamata Banerjee who vociferously accused the Left of harbouring illegal migrants in West Bengal as a vote-bank posing a burden on the State’s resources meant for the lawful citizens of the country. Fast forward to 2018, the TMC is seen opposing the identification of illegal Bangladeshi migrants by the NRC, being supervised by the Supreme Court. Other opposition parties too have jumped on the bandwagon in mimicking this aggressive posturing. But nothing could deter this long-awaited and much-needed exercise. Parties such as SP, RJD, TDP, BSP, JD(S) and AAP, have held protests outside Parliament, casting aspersions on an apex court-guided NRC process. AAP MP and spokesperson Sanjay Singh called the NRC procedure “a divisive tactic of the BJP”, adhering to his party’s tendency of compromising national interest for political gains.

Keeping political considerations aside, it is important that each one of us analyse the situation dispassionately, based on facts. The tricky situation brewing within the various parts of the country, including the national capital, can be gauged from various newspaper reports that have indicated the challenge illegal migrants pose to security agencies.

According a news item published in The Indian Express on December 25, 2009, Delhi and West Bengal have become havens for illegal Bangladeshi migrants. The report said:

“According to a latest Home Ministry data, a total of 3,815 Bangladeshis in Delhi and 5,725 in West Bengal were deported during 2008. Police had identified 1,600 illegal migrants in Maharashtra, 560 in Tripura and 291 in Rajasthan during the period.” Official sources said the national capital and some cities, including Kolkata, in West Bengal act as a haven for illegal Bangladeshi nationals. According to Delhi Police, thousands of illegal Bangladeshi migrants have taken shelter in the city. At least five of them are detained every day from different parts of the city. We cannot deny the problem of illegal Bangladeshi migrants in Delhi. Most of them are involved in crimes. Police frequently launch special drives for their deportation, a senior police officer said. “Around 945 Bangladeshis have already been deported from Delhi between January and July this year, while nearly 18,742 migrants have been deported since 2005, police said.”

Another report in the Economic Times, published on December 16, 2012, reported that “nearly 7,000 Bangladeshi immigrants have been apprehended by Delhi Police for staying illegally in the national capital in last five years.”

In a news item in the Hindustan Times dated April 20, 2018, it was reported that of the 29 Bangladeshis arrested by the ATS for staying illegally in Maharashtra, three of them were suspected of having connections with a banned Islamic extremist organization Ansarullah Bangla Team (ABT) that has been inspired from Al Qaeda. The report further states:

“There are suspicions that ABT has set up sleeper cells in India. In August 2017, the Uttar Pradesh ATS arrested Abdullah al-Mamon, a member of ABT, in Muzzaffarnagar. He told the ATS that his job was to organize fake identification documents, like Aadhar, for ABT members when they came across the border… It’s difficult to identify these terror suspects because not only do they blend in easily with Indians in different parts of the country, but they also have paperwork, like Aadhar and ration cards, which effectively makes them Indian citizens.”

In 2016, in a reply in Rajya Sabha, Minister of State for Home, Kiren Rijiju informed that there were around two crore Bangladeshi immigrants in India. Back in 2004, the UPA Government had pegged the number at over 1.2 crore. The astounding number should propel any conscientious Government to act. However, instead of doing that, the UPA chose to withdraw the statement made by its own Minister of State for Home Sriprakash Jaiswal, buckling under pressure from some quarters. However, Congress leader Shashi Tharoor in his book, Pax Indica, mentioned that “some 20 million Bangladeshis are reliably estimated to have slipped into the country over the last two decades”. People within the Congress seem to be well aware of the facts. However, the part has taken a dubious stand in the entire issue, sacrificing national security concerns at the altar of vote-bank politics.

In the long-term perspective and in the national interest, it is imperative for State Governments, including the Government of Delhi, to initiate a similar exercise to identify illegal immigrants, and take steps for their expulsion. State Governments can begin by taking following measures:

1) Introduce a Bill in the Assembly for identification, expulsion and prevention of settlements of illegal Bangladeshi migrants.

The gravity of the situation cannot be emphasised enough. Such mass illegal migration can pose serious threat to internal security as well as burden the existing national resources and cause permanent disruption in the cultural continuity of a region. Instead of politicising the issue, all parties need to come together and ensure that the NRC exercise is conducted peacefully, not just in Assam but also across India.

( Vijender Gupta, a BJP MLA, is Leader of Opposition in Delhi Assembly)