Want to settle all issues in a friendly ambience-Hasina

- Want to settle all issues in a friendly ambience-Hasina 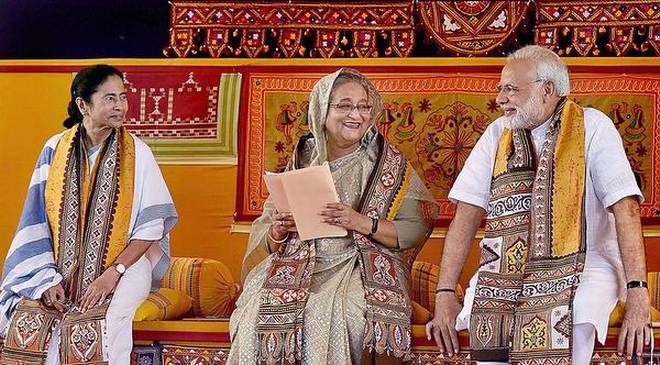 Bangladeshi Prime Minister Sheikh Hasina on Friday said that there are various pending issues between India and Bangladesh, and that they wanted to settle all of them in a friendly ambience.

Ms. Hasina and Prime Minister Narendra Modi participated in two back-to-back events at Visva Bharati University in Santiniketan — the convocation of the university and the inauguration of the Bangladesh Bhavana — and laid emphasis on the shared cultural heritage.

“We have sorted out many bilateral issues. There are still some pending ones but I don’t want to spoil the beautiful occasion by referring to them. We want to settle all issues in a friendly ambience,” Ms. Hasina said at the inauguration of Bangladesh Bhavana, a cultural complex with a museum narrating the history of the 1971 Liberation War, on the campus of Visva Bharati.

Her comment was an obvious reference to the Teesta dispute.

The Prime Minister of Bangladesh gave an emotional speech on how India stood by Bangladesh during its liberation war of 1971 and then in 1975 when her father Bangabandhu Sheikh Mujibur Rehman and other members of her family were assassinated.

Reflecting on the land boundary agreement which settled the enclave issue, she said it was a rare example of border issues between two countries having been sorted out “amicably.”

Mr. Modi said the relations between the two countries were born out of “shared struggles of the past” and both were facing common problems like climate change. “The kind of friendship between India and Bangladesh, contributing to each other’s development, is an example which the other countries can follow and learn from,” he said. Underlining the importance of “mutual cooperation,” he said both countries “can learn from each other in areas of public policy and culture.”

“The progress made by Bangladesh in the area of social sector, particularly in improving the lives of people, is something we can take inspiration from,” he said. Mr. Modi spoke of increased cooperation in areas like connectivity, space connectivity and power. None of the leaders said anything on the sharing of river water.

Minister of Cultural Affairs of Bangladesh Asaduzzaman Noor told The Hindu on Friday that they are optimistic about discussions on Teesta.

In her brief speech West Bengal Chief Minister Mamata Banerjee quoted extensively from Rabindranath and Kazi Nazrul Islam to say that the relationship with Bangladesh will “deepen” despite differences.

Both the leaders spoke about the contribution of Rabindranth Tagore and how the poet is a shared cultural icon between the two countries.

“He is as important to India as he is to Bangladesh,” Mr. Modi said, adding that Tagore is a “shared heritage between the two countries which could not be divided by the British or even partition of the country.”

The Prime Minister described the Nobel laureate as the first global citizen whose influence knew no borders.

Both Mr. Modi and Ms. Hasina made repeated references to the fact that the national anthem of both the countries is by Tagore.

Ms. Hasina said most of the poems written by Tagore were during his stay in Bangladesh and thus their claim on the poet can be no less than India’s.

While recounting how fond her father was of the poems by Gurudev, Ms. Hasina announced setting up of two new universities named after Rabindranath Tagore, one at Shahajpur and the other at Kustia, both the places where the Tagore family managed large zamindari estates.