Kashmir-Glimpses of History and the Story of Struggle 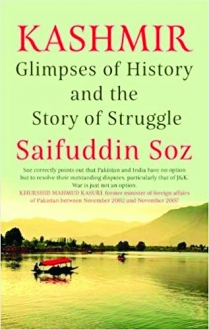 Kashmir: Glimpses of History and the Story of Struggle

Saifuddin Soz displays how there cannot be a single, reliable account of Kashmir’s past. His balanced and well-researched book highlights the lived experience of Kashmiris and adds a rare, human touch to their story, writes UMANG AGGARWAL

In his latest book Kashmir: Glimpses of History and the Story of Struggle, author Saifuddin Soz uses subtle arguments and a very consciously balanced narrative to render almost all versions of Kashmir’s history unreliable. Soz, who is an Indian professor, politician, and author, introduces his book by saying, “A plethora of historical documents, travelogues, and ancient literature has often described Kashmir’s historical significance, cultural identity, literary achievements and natural bounty.” As the reader starts going through the short, crisp, and informative chapters of the book, he/she realises that the author has actually not only gone through this plethora of documents on Kashmir, but has also presented their content in a reader-friendly packaging. He even includes the various arguments made by scholars and historians who studied these accounts later. So, the sheer ground of recorded history that is covered in this very readable narrative, is a rare asset for anybody who is even remotely interested in understanding the valley’s past.

Soz starts with the description of Kashmir offered in Kalhana’s Rajtarangini. Anybody who has read even a little about Kashmir’s history would know that this part-mythology, part-fantasy account on Kashmir is the oldest and arguably one of the most important sources on the subject. It’s only fair that the author refers to it. He shows how the theory that Nagas and Pisachas were the first creatures who peopled the lake-turned-land of Kashmir is in conflict with the findings from the Burzahom excavations. Mythology, then, must be seen as interesting, probable but still somewhat capricious, he says. He adds that the various versions of Kashmir’s past are “shrouded” in either “mythology” or “mystery”.

The probable sources of Kashmir’s name — Kasheer or Kashapmar from the Rigveda, Kaspatyros from Herodotus’ accounts, or Kasyapapura and Kasvira from Prakrit — are discussed in detail, along with comments on how there are arguments supporting as well as ridiculing each of them. Further sources referred to in Soz’s narrative range from The Encyclopedia of Islam to Chinese traveller Fa-Hian’s travelogue from when he visited Kashmir in Emperor Chandragupta Vikramaditya’s era to Major TR Swinburne’s ‘holiday account’ of the valley. Francois Bernier’s account of Mughal emperor Aurangzeb’s visit to Kashmir in December 1664, German traveller Charles Von Hugel’s account of the exploitation of Kashmir’s resources at the hands of Sikh rulers, and W. Wakefield’s critical commentary on the Treaty of Amritsar that changed the face of the “happy valley,” are only some of the many other insightful sources that Soz’s book refers to.

The narrative cannot be found favouring one version over the other at any point. Each historical claim that is discussed in the book is balanced out by another claim that opposes it.

The book indulges in the comments made by travellers regarding the physiognomy, moral values, and intellectual capabilities of the people who lived in Kashmir. Charles Ellison Bates, who was preparing a ‘gazetteer of Kashmir’ for the British Government, is quoted when he says, “Kashmiris were poor but were generous and offered food.” He says that their behavioural flaws were a result of the difficult and unfair conditions imposed on them by the administrators. Again, in Chapter 22, Sir Walter Lawrence’s observations about the ‘liveliness’ and ‘ingenuity’ of Kashmiris that they were being robbed off because of “misgovernance”, is given space. Lawrence appreciated Kashmir’s Venice-like beauty and Kashmiris’ dexterity in handling the “shabbily” built shikaras and their skill at managing modern embroidery, wood carving, and papier-mâché art despite miserable living conditions. Soz also underlines Swinburne’s observations on the systemically fractured confidence of the Kashmiris who were inclined to copy Western designs despite having the skill to create original ones.

The book starts with talking about Hindu and Muslim claims to the valley and ponders over who was the first foreign traveller to eulogise its heavenly beauty. But, as one reads on, it shares strategically chosen bits from lesser known travel accounts written about Kashmir. In doing that, Soz manages to shift focus from everything that defines Kashmir in the popular imagination to the lived experience of Kashmiris. Their impressive physical appearance, generosity, and underappreciated skills are given space by Soz. And that’s where the unique beauty of this Kashmir account lies. It manages to give a personal, human touch to the understanding of Kashmiris and attempts at rescuing the varied stories of Kashmir from layers of “misrepresentation” and decades of “misgovernance” in the past.

Towards the end of his book, Soz says that “Kashmir is not a complex problem but a simple proposition.” He suggests a route towards a simpler solution by saying that it is the past experience of these people which needs to be understood for the present political problem to be solved.